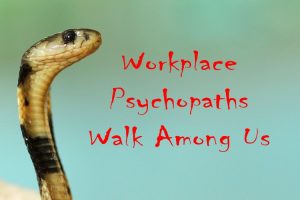 If we think of psychopaths at all we likely think of them as being like something out of a horror movie. An emotionless machine-like monster who inflicts pain, fear, misery and even death with no signs of remorse. The chances of meeting this criminal type of psychopath are slim so hopefully you have had the good luck to avoid them. However, you may well have encountered a workplace psychopath or two in your time.

Psychopathy is part of what is known by psychologists as the dark triad. It shares the billing with Narcissism and Machiavellianism. Psychopathy (synonymous with Sociopathy) is an anti-social personality disorder (ASPD) and broadly typified by a person’s attraction to power and control, persistent antisocial behaviour, impaired or absent empathy and remorse, along with a forthright, dis-inhibited and highly egotistical approach to their lives and work.

I can state here and now that, at some time or another, I may well have exhibited most of the traits mentioned above; I am only human and it would be fair to say we have all been there. However, when they are strongly evident and persistent in any one person it can be a real problem for those people who must manage them, work closely with them or work for them.

In everyday life, the varying estimates settle on about one to two percent of the population who are nearer the high end of the measuring scale but in the business environment it has been estimated that as many as three to four percent test high on the negative traits. Four percent equals one in twenty five people by the way.

This might seem alarming until we consider for a moment that the traits mentioned above are also the traits which could propel many people to the top of the corporate ladder. Ironically many workplace psychopaths are very successful at their work especially in the arenas of politics, business and even high stakes sport. They may very well be superficially charming and supremely confident but they will stop at nothing and stomp over anyone to get ahead and not feel one tiny bit of remorse or guilt.

Please note that you do not have to be a psychopath to successfully get to the top and lead any sort of organisation or department; at least ninety six percent of people in business are well-adjusted and normal individuals – phew! The problems start when you encounter one of the four percent. If you find yourself standing between them and their goals then you represent a real problem to them; one which they will be keen to deal with. Be on your guard.

How exactly do you spot such a workplace psychopath?

By their very definition these people can be hard to identify. The workplace psychopath will also lie on a psychopathy spectrum ranging from mild to strong and this adds to the issue of identification.

You should know your team well. You may have some awkward people and you may very well experience some difficult behaviour but in terms of psychopath spotting you should be on the lookout for a larger cluster or combination of traits based on the following three broad groupings:

This area relates to a person’s ability to deal with other people. The potential workplace psychopath will be superficially charming, charismatic and highly self-confident when you first encounter them. You may very well find yourself drawn to them. They are effective networkers and will often seek to build connection platforms to move up the corporate ladder with ever increasing velocity. They may not have a full range of emotional intelligence themselves but what they are often very good at is identifying reaction triggers and potential weakness in others then pushing the right buttons when they feel the need.

This area relates to moods, feelings and attitudes. Whilst initially charming and likeable they will start to show more unpleasant traits over time. The workplace psychopath will display a marked lack of guilt or empathy. Whenever they mess something up they will blame others. If they upset someone they simply will not care.

The workplace psychopath is often a risk taker; either with their resources or more likely with the organisation’s resources. They often display inadequate impulse control so be alert for displays of inappropriate emotion or language coupled with an all to ready willingness to flirt with danger. They are excitement junkies and hate to be bored. If you give them routine tasks they will always find ways to dump them on someone else or simply avoid them. They can fake trustworthiness very well and they are happy to dupe and coerce their colleagues and peers and they will frequently lie and cheat to achieve their ends. They can appear bold and dynamic but there is a fine line between this and recklessness. They will often exhibit a range of bullying tactics so be on your guard always.

Positively identifying a workplace psychopath can take time as you need to not only build up a clear picture but you need to be sure of your identification.

Once identified you will need to deal with them somehow which is I am afraid a whole other ballgame.

I have provided some solid guidance on this in my book “Assertively Managing Difficult People” which is available on Amazon in Kindle and paperback formats. It covers dealing with a range of challenging workplace behaviours. Here is the paperback link http://getbook.at/AMDPPB so why not check it out.

Professional Coaching Solutions Andrew D. Pope
You know how some employees can end up under-performing, going sick or even considering quitting their job because they get totally stressed out or stuck with issues and problems they simply can't cope with or even discuss with anyone at work? Well I'm the guy the smart employers call in to help those people get themselves unstuck and back on track. I add huge value to the organisation's bottom line this way.

For me, it's all about helping people to maximise their emotional intelligence and their mental resilience.

I help stressed people get their mojo back.

Check out my popular book "The Resilient Professional"

Professional Coaching Solutions Andrew D. Pope
You know how some employees can end up under-performing, going sick or even considering quitting their job because they get totally stressed out or stuck with issues and problems they simply can't cope with or even discuss with anyone at work? Well I'm the guy the smart employers call in to help those people get themselves unstuck and back on track. I add huge value to the organisation's bottom line this way.

For me, it's all about helping people to maximise their emotional intelligence and their mental resilience.

I help stressed people get their mojo back.

Check out my popular book "The Resilient Professional"

GROW YOUR BUSINESS! Subscribe to our SME Business Academy Newsletter absolutely FREE. Fill in the form below and be the first to get information on:

Join our trusted and respected Newsletter NOW:
Close this popup